Friedrich Becker was a goldsmith and maker of jewellery with prolific ideas, imagination, innovation and technical skills in his craft. Apart from making jewellery and everyday objects he created a number of large scale kinetic sculpture and objects. His designs and as Professor at the Düsseldorfer Kunsthochschule he inspired and shaped future generations of goldsmiths.

During his lifetime he was highly regarded, which is reflected in the number of awards and exhibitions he had over the years. A special honour for him was the solo exhibition at Goldsmiths‘ Hall, in London, especially as he was also the first German artist to be given a show there. Shortly before Becker died he was awarded an Honorary doctorate by the Royal College of Art, in London. In the 160 year history of the Royal College this was the first time such an honour had been given to a goldsmith.
Friedrich Becker was without doubt one of the most important goldsmiths after World War Two. The following will give you an overview of his work.

One of the most revolutionary ideas in his early work was the ‚Two Way Ring‘ made in 1956. The starting point for this design was the question, if the oval-shaped moonstone cabochon was aesthetically more pleasing on the hand when worn either vertically or horizontally. Friedrich Becker solved the problem by devloping a ring that can be worn in two directions. Thus the wearer can vary the visual effect. 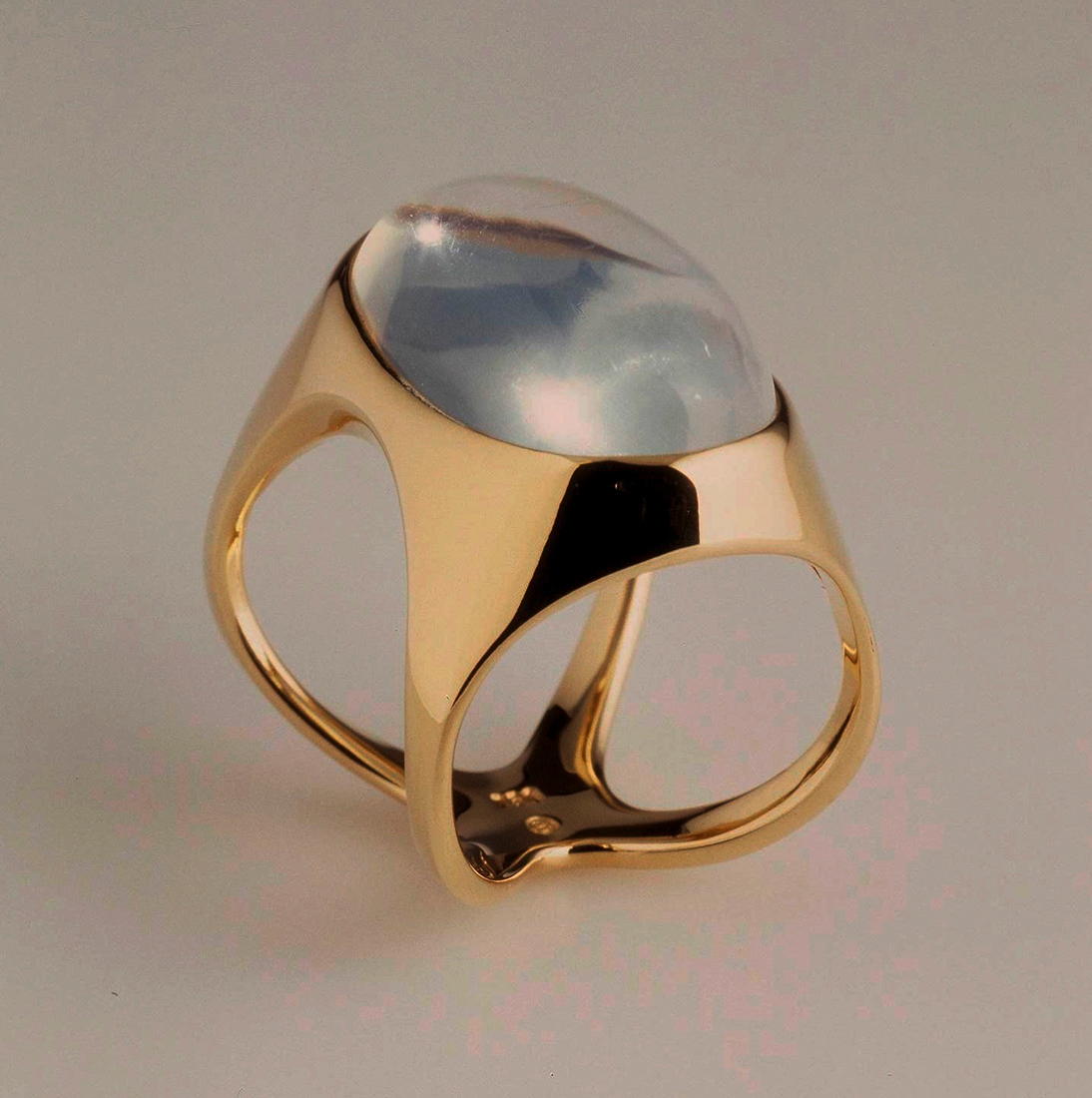 In 1959 Becker developed a gauge for diamonds to determine the caratweight of the gemstone. The ‚diamondseller‘ has become a valuable tool for the goldsmith, without Friedrich Becker having filed for a patent. For him this was of secondary importance, as he had already turned his interests toward developing new ideas from this concept. Of greater importance to him was the aesthetics of the gauge, and how it took on variable forms when swivelling the pointers. 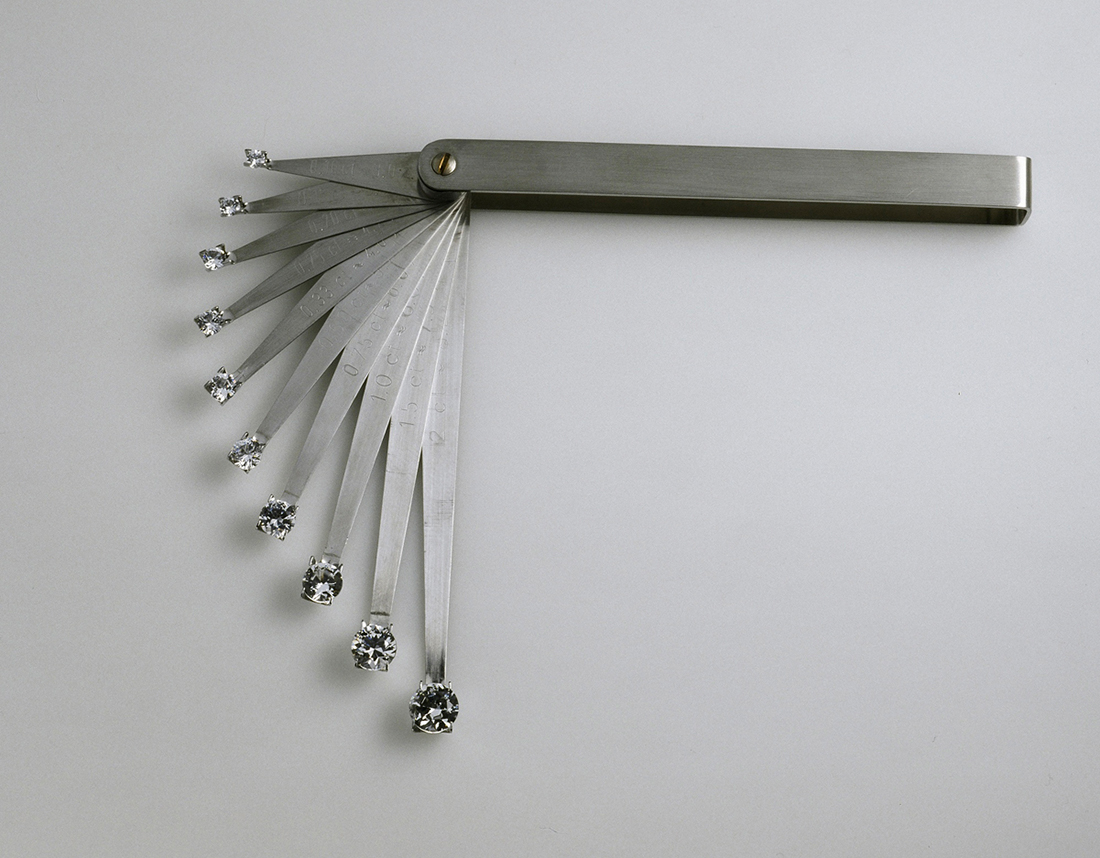 The idea of variability continued to fascinate Friedrich Becker. For him the wearer of the jewellery was to have the possibility of creating different visual effects. On rings and bracelets he adapted the settings so that the gemstones or beads were interchangeable and thus the wearer could choose a colour scheme. For this special type of setting applied to a ring he received the Bavarian State Prize in 1959, the setting had not been seen before, any traditional elements, supports or galleries had been ignored. Thus the decorative element of a setting takes over the function of holding the gemstone. For Friedrich Becker the simultaneity of ornament and function remained important, as also avoiding any unnecessary features 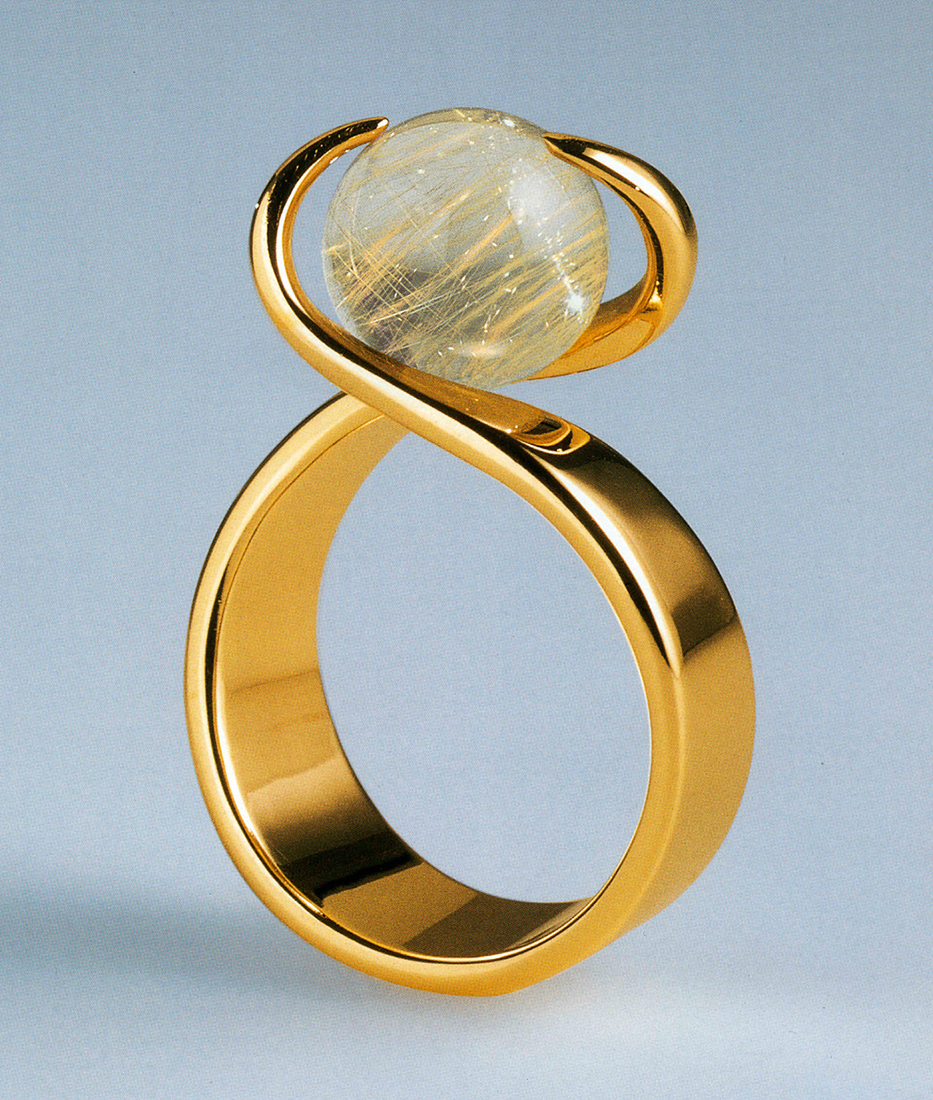 This idea was developed further, and the wearer could now design the jewel by having the possibility of varying its shape. The most suitable type of jewellery for such a concept is the brooch, such as the one shown here, made in 1962. 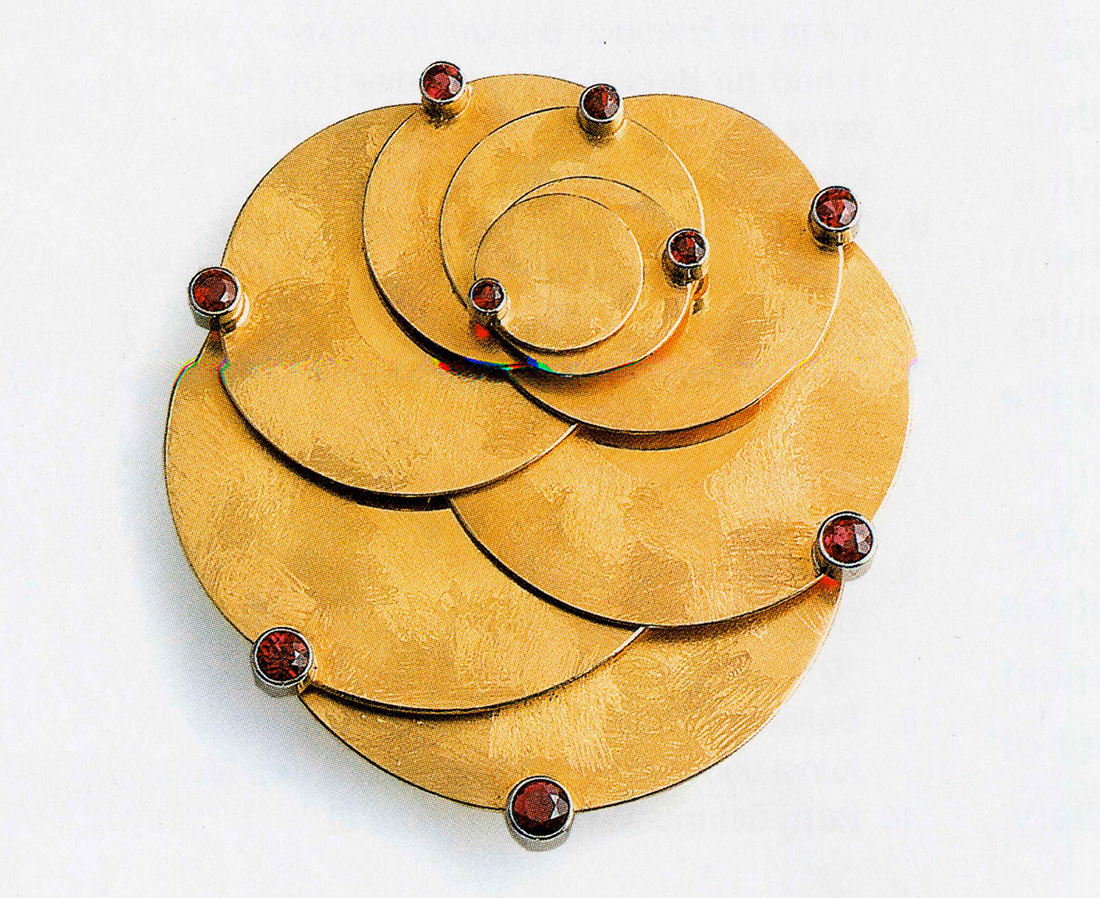 A further example for Professor Friedrich Becker’s idea of variability in jewellery is this brooch made in 1978. The piece has innumerable permutations, as shown in the image opposite. 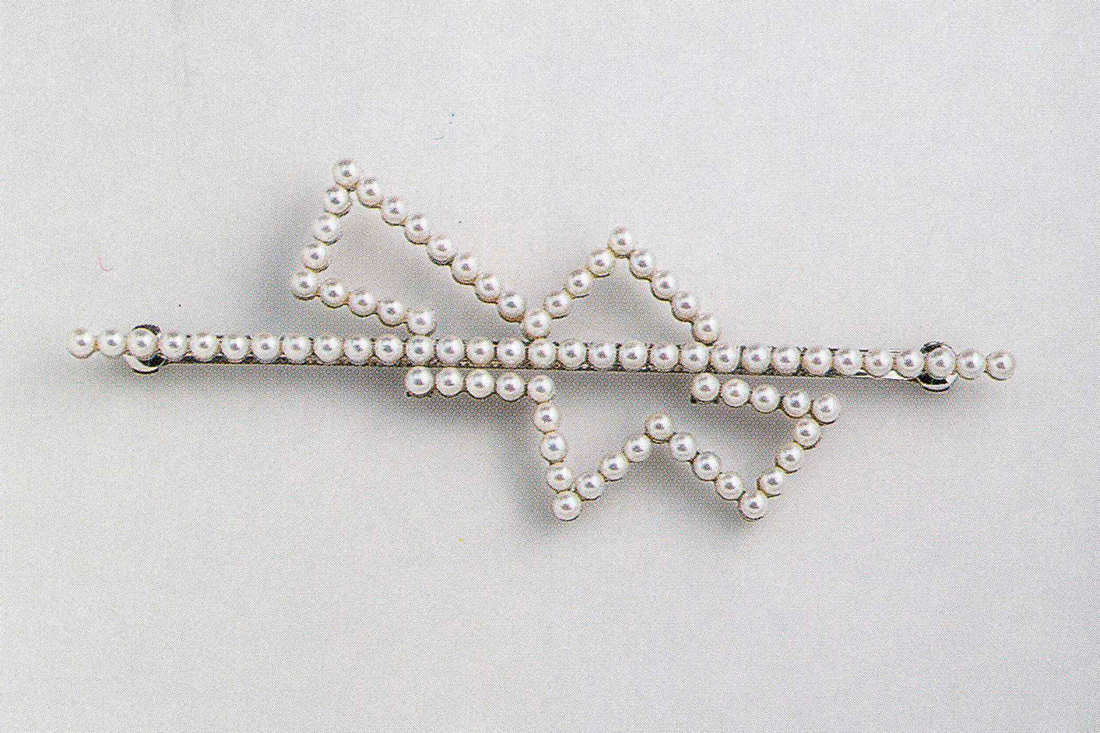 From 1964 onwards Friedrich Becker developed the next step from jewellery being variable, to that of kinetic jewellery, which moves perpetually when worn. Now Becker benefits greatly from his knowledge of aeronautical engineering, and most of all his joy in experimenting and discovering new concepts. To make kinetic objects delicate technology and a high degree of craftsmanship is required, Friedrich Becker excels in both criteria. 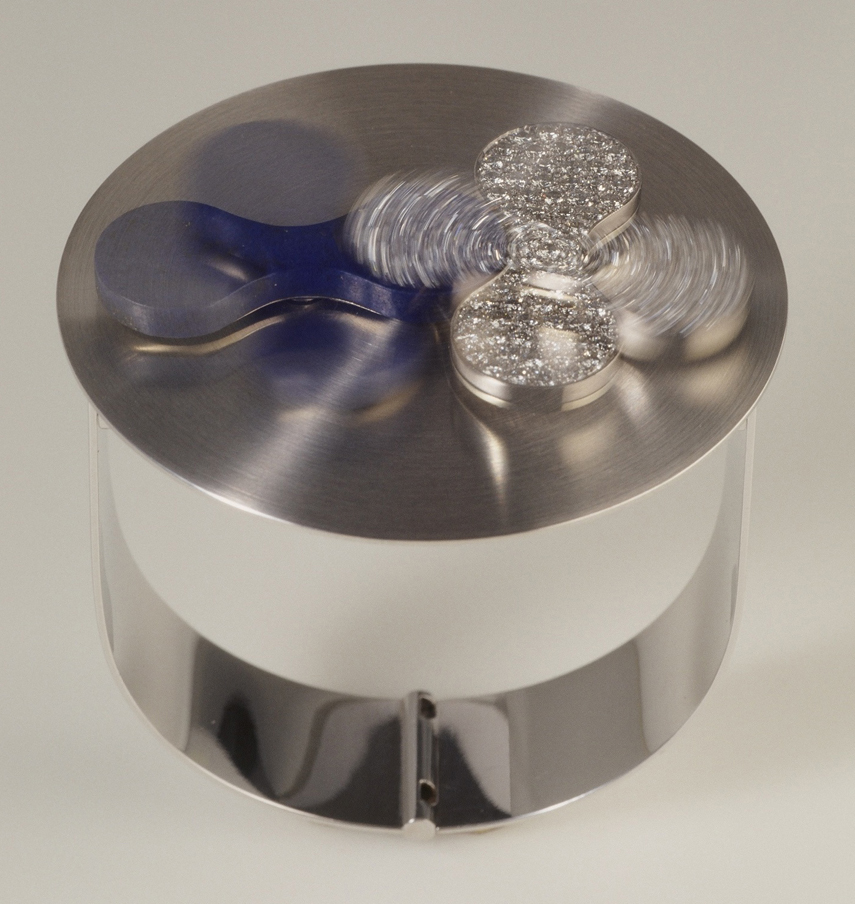 The kinetic ‚Two Finger Ring‘ reveals a further invention of Friedrich Becker. He intentionally worked with synthetic gemstones and made them socially acceptable. It was important to him that the viewer could detect through size and shape that the stone was man-made, and not original. It is significant that the synthetic stones are not combined with silver or gold, but with stainless steel. The introduction of these materials inspired numerous jewellers. The size of the kinetic stone required a larger scale ring, which is worn over two fingers – a further important feature within Friedrich Becker’s oeuvre. 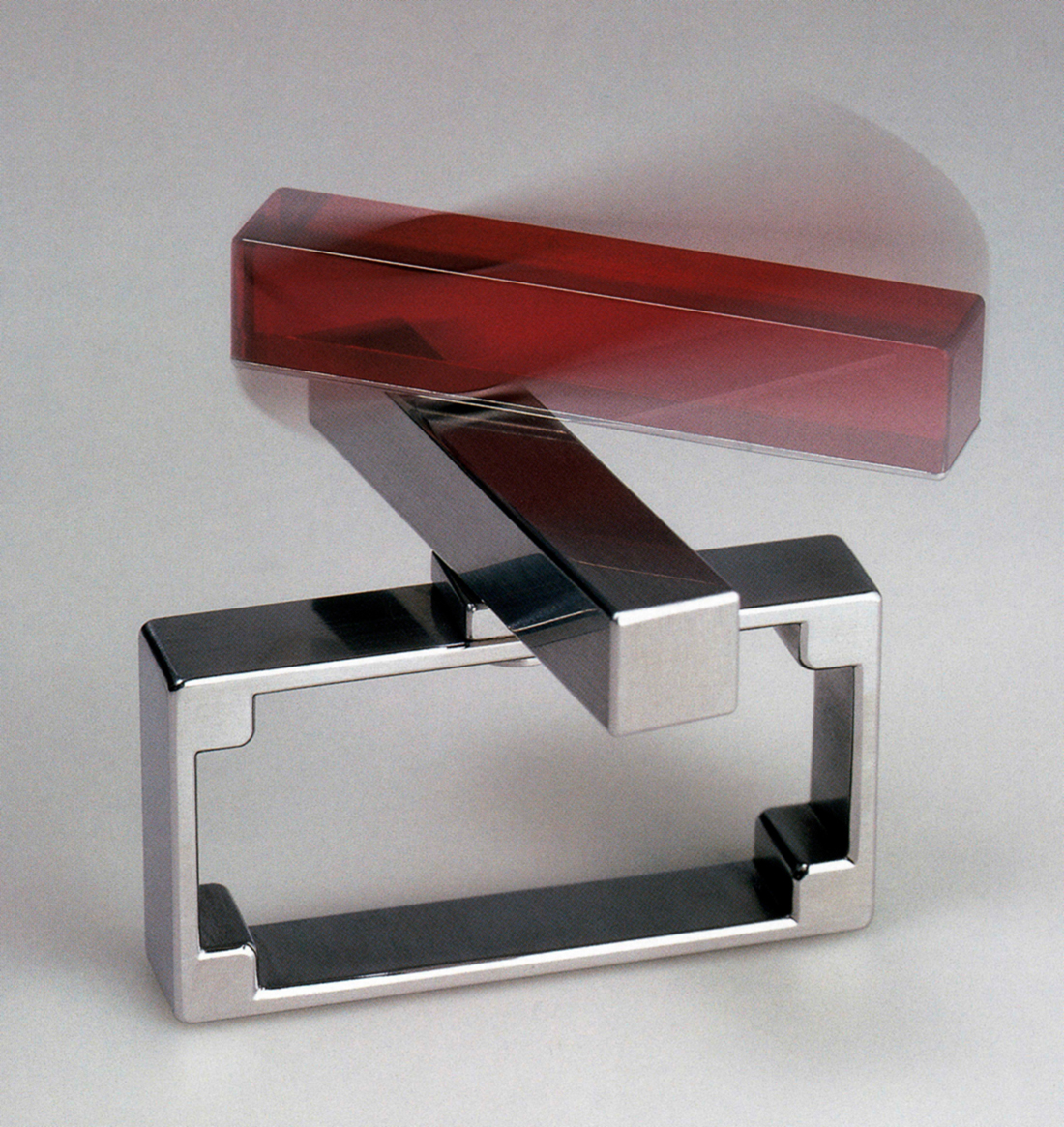 Friedrich Becker is well-known by the general public through his kinetic sculptures in public spaces. These often relate to his kinetic jewellery creations. Also his known ‚Sun Wheels‘ in the brewhouse of the Veltins Brewery are based on the principles applied to a brooch he made 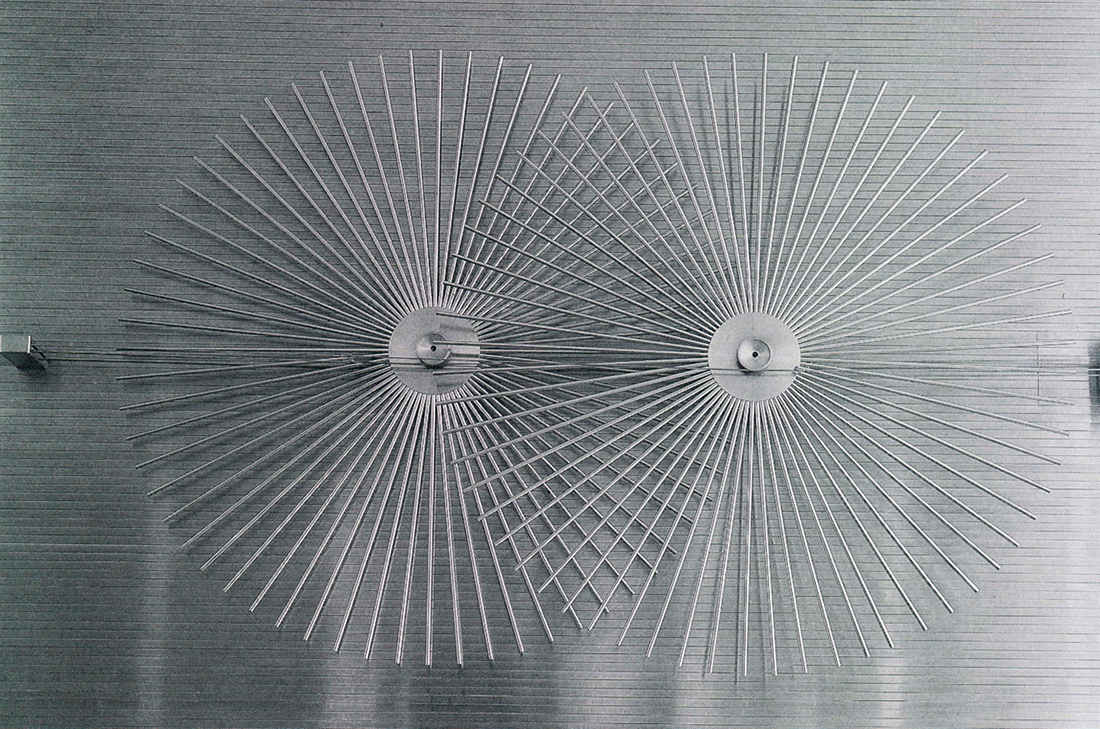 A particular design of Friedrich Becker, which was frequently copied by the jewellery industry, is the ‚knife-edge‘ setting, as he called it, whereby the gemstone is held by a fine, knife-edge-like profile. The almost invisible setting consists of a funnel-shaped opening with inserted loop. This process required high precision which was Becker’s trademark. He rejected any lack of precision or coarse workmanship. 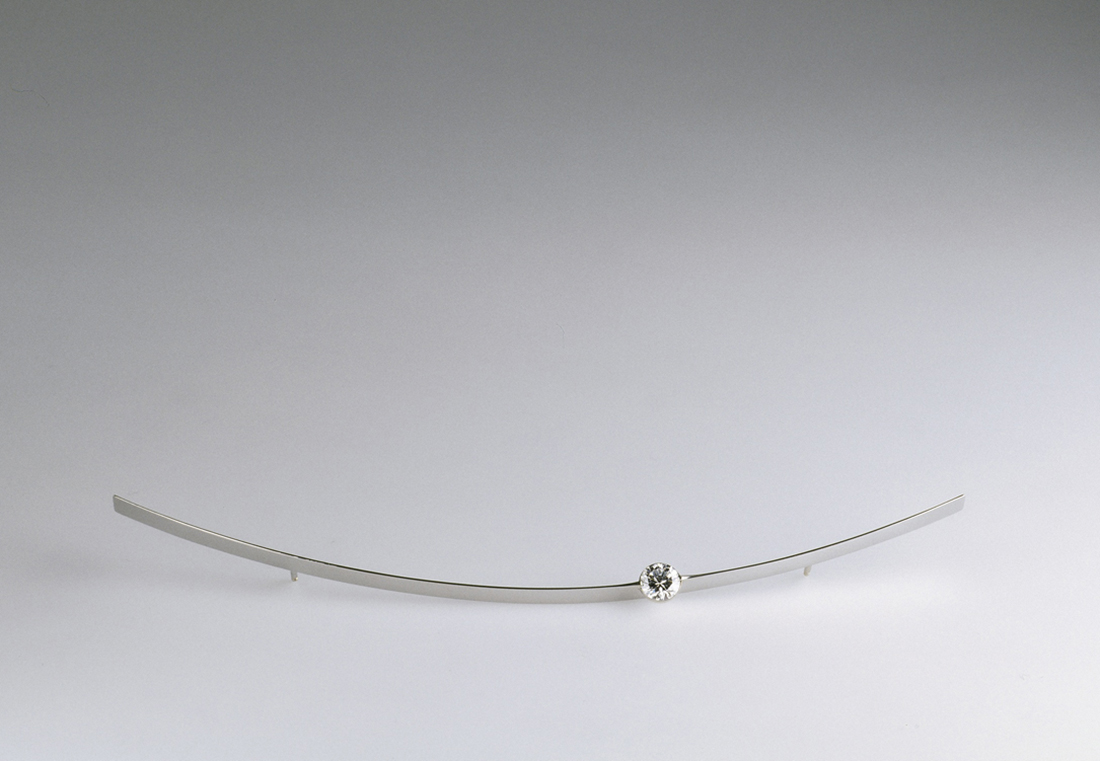